Either your web browser doesn't support Javascript or it is currently turned off. In the latter case, please turn on Javascript support in your web browser and reload this page. The purpose of this grounded theory study was to describe and understand contemporary childbearing women's perceptions of the role of childbirth education in preparing for birth. Participants were interviewed three times: prior to beginning classes, at the end of classes, and within 2 weeks after giving birth.

Constant comparative analysis of the data was concurrent with data collection. Since then, the health-care milieu has changed, technology has increased, and expectant parents' motivations for attending childbirth education classes have appeared to change Martell, Department of Health and Human Services, Therefore, the purpose of this study was to explain and understand contemporary women's perceptions and experiences of childbirth education classes.

Prior to the s, investigators focused on researcher-identified outcomes of childbirth education, primarily physiological outcomes Jones, Beginning in the early s, a few descriptive studies of women's perceptions began to appear in the literature. Other investigators asked participants to rate the content that was offered. Beger and Beaman's survey of class participants demonstrated a difference between participants' ratings of the content and that of the educators.

Little is known regarding contemporary childbearing women's perceptions of childbirth education classes. Grounded theory, an inductive approach, was particularly suited for the present study to explain how women interpret formal childbirth education in the process of preparing for childbirth.

All participants signed an informed consent form prior to data collection. The study was conducted in urban and rural settings within a mile radius in south-central Kansas. As data collection progressed, snowball sampling was added. Participants of varying ages and from varying sites were sought in order to confirm and disconfirm developing concepts. Sampling continued until saturation was reached.

Primarily, data collection consisted of audiotaped interviews with open-ended questions. All of the participants were interviewed three times, lasting 30—90 minutes: prior to beginning classes, after the fifth class in the series, and within 2 weeks after the birth of their infant. All interviews occurred outside of the class setting, with most interviews taking place in the participants' homes and two conducted in the conference room of a physician's office.

Additional sources of data included a review of class materials as well as 35 observation hours of childbirth preparation classes, breastfeeding classes, cesarean classes, infant-care classes, and television programs that were frequently viewed by the participants. The data were analyzed by constant comparative analysis Glaser, This process entailed using substantive coding, which involves open coding followed by selective coding to conceptualize the data. Theoretical coding followed in order to conceptualize how the substantive codes related to each other as relational statements.

The researcher read and reread the transcripts for verification and saturation. As data collection and analysis progressed, a simultaneous review of the literature supported the theoretical conclusions. All data analysis was conducted with methodological consultation from an experienced qualitative researcher. Lincoln and Guba's criteria for naturalistic inquiry were used to establish trustworthiness.

Data were collected over a period of 7 months, with each participant interviewed three times. Document review was an additional source of data collection. Peer debriefing was conducted after the first two interviews and intermittently, as needed, throughout the remainder of the study. Finally, the processes of member checks involved having selected participants verify the analytic categories, interpretations, and conclusions.

The detailed descriptions of the findings provide the evidence for transferability. To establish dependability and confirmability, the researcher retained all records of data collection and analysis. The sample ultimately consisted of nine pregnant women aged 22 to 37 years; mean All of the participants were pregnant women who had previously never attended childbirth education classes.

All participants planned to breastfeed, but four did not attend specific breastfeeding classes. Like it would be better to have somebody telling me when you're doing it. She had made arrangements to attend only the class session that covered cesarean birth but attended all other prenatal classes that the facility offered. From the beginning, it was clear that childbirth education classes, although a separate entity, were contextually situated in the larger process of transitioning to motherhood.

Negotiating the Journey is defined as the process of moving through an unknown pregnancy experience, with childbirth education classes as a critical part of transitioning to motherhood. Another woman expressed it this way:. The first phase, Exploring the Unknown, relates to activities during the first two trimesters of pregnancy to build a knowledge base about the childbirth process. Clearly, all of the women had already been involved in seeking information about pregnancy, labor, and birth as they shared how they had read, questioned, listened to, and sought information on birth.

Yet, the women repeatedly expressed their lack of knowledge. The second phase, Making It Real, is identified as participation in childbirth education classes for the purpose of defining and clarifying the task of childbearing. Another woman said:.

There's so much—just like there are so many extra products you can buy for a kid, there's so much extra information that whether you know it or not, it's not going to help…this is the bare bones, this is how you're going to do it. I thought that was very helpful.

The women also discussed the change in their relationship with their husbands. Prior to classes, all of the women had expressed the need for their husbands to learn how to help them through labor. They now described a husband-wife bonding that they had not expected to occur. This was a typical response of all of the women. Overall, there was consensus among the women that classes were helpful, especially for making the approaching birth real. During this final phase, all but one woman who did not complete the class series due to her impending induction expressed that they were prepared and ready to go.

They knew they were ready, but it was not easy to articulate what they meant. However, as the women spoke, indicators of readiness emerged: knowing, decreased anxiety, confidence, control, and decision-making. The concept of knowing emerged as highly important for sensing readiness. Well, they've helped in as far as explaining the technical side of birth and the different phases. And understanding in, you know, approximately how long each phase can last and then what you can expect at each phase and when to expect to go to the hospital and then what to expect at the hospital, hopefully, to some extent.

And also giving us different options when we're at the hospital. The knowing decreased their anxiety and fostered a sense of confidence. Prior to classes, there was tension and a sense of the women's discomfort associated with not knowing what was going to happen to them. Another woman stated:. Because, you know, I know it's going to happen…well, it's inevitably going to happen, but now I know what to look for and I think when I first talked to you I had a lot of anxiety and now I'm not really that worried about it.

I think I will be fine. Although the women had accepted that some things were out of their control, they still expressed the need for control and the ability to make their own decisions. To facilitate control and decision-making, by the end of classes, all of the women had either finished or were working on writing a birth plan. They viewed the birth plan as a communication tool as well as a tool to help them sort through all of the options presented to them. Finally, the women indicated their readiness through their more focused discussion on the baby and becoming a mother. I don't really care about the labor—you know, yeah, we have labor.

Well, labor is labor. You know. Overall, the participants' narratives support a relationship between childbirth education and readiness for the childbirth experience.

Previously researched concepts—for example, control and decreased anxiety—emerged as important, but not one of them alone was consistently significant as an outcome associated with participation in education classes. Theoretically, it seems reasonable that these concepts were actually process indicators of the overall outcome of readiness. Other than methodological issues e.

The childbearing experience has consistently been described in the literature as a significant event in a woman's life and as a developmental stage Bergum, ; Lederman, ; Malnory, ; Nichols, ; Rubin, Thus, childbirth education can be viewed as one of the steps toward the goal of becoming a mother. Likewise, Lederman and Mercer , suggested that successfully completing the tasks of pregnancy assists the woman in this paradigm shift to motherhood. Meleis, Sawyer, Eun-Ok, Messias, and Schumacher's middle-range theory of Experiencing Transitions provided additional insight and support for development of the emergent theory of Negotiating the Journey to motherhood.

Meleis et al. The Experiencing Transitions model, although complex and multidimensional, includes five essential, interrelated properties: a awareness, b engagement, c change and difference, d time span, and e critical points and events. Findings in the current study revealed properties similar to the Experiencing Transitions model. The women were aware of the major change that was about to occur in their lives and that they were in need of real knowledge. Thus, they engaged in focused knowledge-gathering by attending childbirth education classes.

As a result, the women expressed a change and difference in their knowledge, anxiety, confidence, and feelings of control.


These changes occurred over the time span of the classes. Subsequently, when the women reached a critical point, they voiced their readiness for birth. 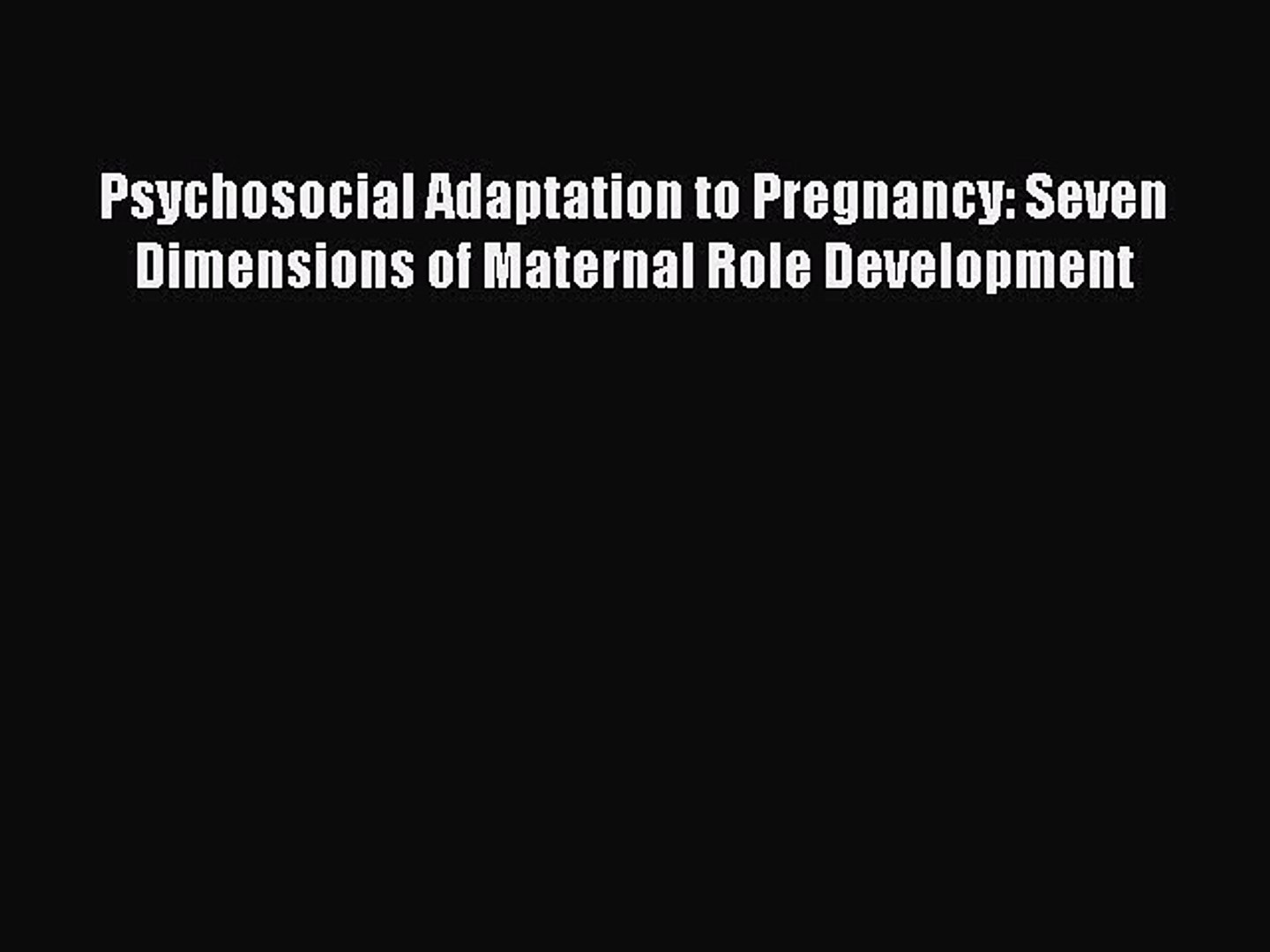 This finding is not surprising, because these women had grown up within the medical model of birth that is highly prevalent in our culture.